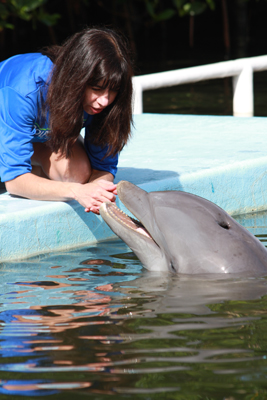 Kelly Jaakkola is a cognitive psychologist, marine mammal scientist, and Director of Research for DRC. She earned her Master's degree in Psychology from Emory University, where she began her career studying cognition in chimpanzees and human children and received her Ph.D. in Cognitive Science from MIT. Her past research includes studies on number concepts, object permanence, imitation, and communication in dolphins, chimpanzees, and human children. Her current work focuses on dolphin cognition, communication, and welfare.


Dr. Jaakkola's research has been published in numerous international scientific journals and book chapters, and her work on dolphin cognition has received worldwide coverage in newspapers, magazine articles, books, and television. She has taught courses on human and animal cognition at several colleges, and chairs the Scientific Advisory Committee for the Alliance of Marine Mammal Parks and Aquariums.